See why Stoner Sloth, the star of Australia’s anti-marijuana ads, has gone viral for all the wrong reasons. 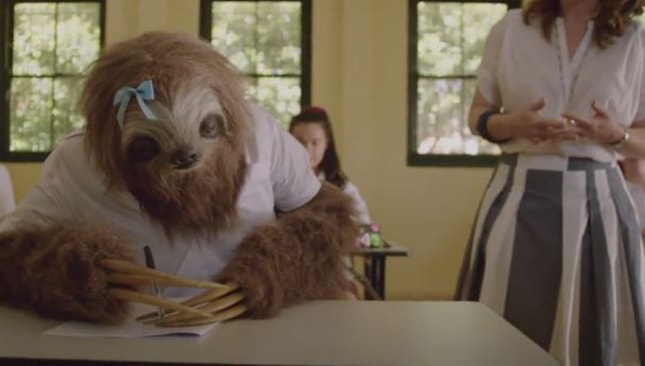 Most ad campaigns dream of going viral, however for the New South Wales “stoner sloth” anti-marijuana campaign, the type of attention the ads garnered was probably not what they were hoping for. The campaign was designed to be “sharable” by teenage audiences on social media, and it did in fact go viral with the videos receiving more than 4 million views on Facebook and YouTube, but its popularity is almost entirely linked to ridicule, mockery and criticism for missing the mark when it comes to drug education.

How Stoner Sloth Missed the Mark

The campaign’s videos each feature a gigantic stoner sloth who fails miserably in everyday situations supposedly due to the character’s excessive marijuana use. The ads are meant to deter teens from using marijuana by depicting how marijuana use can negatively impact their school performance and relationships.

However, the whole campaign has now become a joke — which means no one is taking the message seriously. To make matters worse, the campaign also overlooked the fact that it shares its website name with an online pro-marijuana forum which is reached simply by forgetting to include the Australian domain (.au) after the web address.

The National Cannabis Prevention and Information Centre (NCPIC), who were initially noted as collaborating with the NSW government on the campaign development, has released a statement distancing themselves from the embarrassing end product.

According to the NCPIC’s statement the organisation’s involvement was limited to providing general recommendations and basic research about other anti-marijuana campaigns. “In this case, those general recommendations were things like being aware that teenagers are intelligent and have access to a lot of information, so campaign approaches should respect them and give them credit by avoiding hyperbole,” the statement said. They went on to say that “the current stoner sloth campaign does not reflect NCPIC views on how cannabis harms campaigns should be approached, as was implied by the media.”

It certainly does not seem like the creators of the campaign took the NCPIC’s recommendations very seriously. The stoner sloth character and the effects of marijuana are exaggerated and the videos have been criticised for patronising the audience they are trying to connect with.

In one video, stoner sloth David is shunned at a party for being too stoned to offer more than a grunt in response to his peer’s distaste of people who wear socks with sandals. This video received additional criticism as all the teens at the party are holding red plastic cups — the iconic symbol of drinking alcohol — which is interpreted as sending the message that drinking alcohol as a teen is fine, but smoking marijuana is bad. In fact, rather than targeting marijuana use, it is Australia’s drinking culture that many wish to see addressed as alcohol-related harms continue to plague the nation.

While most people simply laugh off the stoner sloth ad campaign as a big failure, for those who know anything about the true nature of drug and alcohol abuse disorders, the videos more than fail to miss the mark and are a disturbing reminder of how far Australia needs to come in order to effectively address and prevent teen drug abuse and addiction.

Using social stigma in an attempt to prevent drug use is not only ineffective, but harmful. The apparently inept stoner sloth character could perhaps even more accurately be representing depressed sloth, or disabled sloth, and in each video he is met with contempt rather than compassion, and mercilessly shamed by everyone around him.

While all teens are at risk of trying drugs or alcohol, the fact is that the teens at highest risk for abusing drugs and alcohol and becoming addicted later in life are those who already struggle socially and/or academically. Showing that marijuana use will turn you into an outcast does little to help kids who already feel like they do not fit in to stay away from drugs.

The ad’s tagline “you are worse on weed” sends the message that people who use drugs, including marijuana, are bad. Making bad choices and being a bad person are distinctively different messages with the latter linked to shame, societal condemnation, and negative social stigma. The last thing teens who are struggling need is more shame.

Unfortunately, ad campaigns such as stoner sloth not only fail to provide any factual information that could help young people make informed decisions about marijuana use, but perpetuate negative social stigma so that those who do need help are less likely to reach out.

How can we Talk to Teens More Effectively about Drug Use?

Saatchi & Saatchi, the advertising agency that created the stoner sloth videos, has come out with a statement defending their work, citing that the majority of criticism the videos received was not from their target audience. They go on to say that the videos’ widespread popularity has created a platform for discussion between parents and teens about marijuana use.

While it is true that prevention starts at home, and creating ways for parents and teens to talk openly about drug use and addiction is a worthwhile goal, there are more effective and less damaging ways to approach this than what the current campaign offers.

As the NCPIC suggested, teens are smart and have a myriad of resources at their disposal to learn about drugs. Marijuana education should begin with understanding why teens try marijuana in the first place, and from there adults can talk to teens in a direct and supportive way about the consequences of marijuana use and help them to separate the facts from the myths.

Connecting with teens about drug use is not an easy task, and hopefully with each failed attempt we can learn more about what teens really need when it comes to addiction prevention. However, one thing that is for sure is that further stigmatising and shaming drug users does more harm than good. And de-stigmatisation is actually a necessary goal that society too often overlooks in helping people talk about drug use and prevention. If someone close to you is addicted to marijuana and needs help, feel free to contact us for advice.