How to Know if You are Living with a Sex Addict

Do you suspect that your partner may be a sex addict? How would you know? You can empower yourself with knowledge about sex addiction, learn about its telltale signs, and what steps you can take if you believe your partner is a sex addict.

Tiger Woods’ serial cheating, frequenting prostitutes for stress relief and subsequent breakup with Lindsey Vonn; Eliot Spitzer’s prostitution scandal and admission that he finds paying for sex exciting; David Duchovny’s documented and widely publicised revelation that he is a sex addict; Charlie Sheen’s diagnosis as HIV-positive; and now, Khloe Kardashian’s accusations that Lamar Odom is a sex addict and was cheating on her during the majority of their marriage — we have all heard the tales of infidelity and scandal that afflict even those who seemingly could not want for anything more.  What would compel someone with so much at stake to engage in such risky sexual behaviour?  In fact, what compels anyone to repeatedly engage in sexual behaviour that reflects poor judgment and transgression against their loved one?

Issues in your sex life can be an indicator of sexual neglect, such as infrequent sex and no sex for extended periods of time. Sex can also start to feel impersonal, which leaves partners of sex addicts feeling as though their partner is acting instead of participating. It is common to start thinking that you are just a prop in his need for sex. 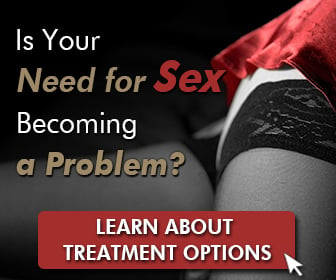 Eager to have you leave

Many men who are sexually addicted will engage in their addictive activities whenever they are given the chance. The more that you are away, the more chances he has. Some suspicious examples include getting nervous before you leave and getting up at odd hours of the night to do ‘work’, especially if you are aware of his history of missing deadlines. It is also common to feel as though you came home at the wrong time, based on his response.

When it comes to sex, he does not take no for an answer

Sex addicts are often unable to accept an unfulfilled desire. He may complain, nag or hound you until you engage in sex. He also will not accept any reasons not to have sex, such as: ‘I have a headache…’ or ‘I’m tired…’

He pressures you into things you find degrading

Do not make the horrible mistake of trying to satisfy your partner by doing things that make you feel degraded. You should not engage in any sexual activity that you are not comfortable with. Sex is meant to be a caring and loving act, charecterised by shared respect.

There are several ways in which a sex addict can lie about their behaviour, such as:

Any lying can be considered as addictive behaviour, because he is choosing his addiction over honesty.

Sex Addiction — Forms of Acting Out

Sex addiction (also referred to as compulsive sexual behavior, hypersexuality or hypersexual disorder) is defined as “an obsession with sexual thoughts, urges or behaviors that may cause you distress or that negatively affects your health, job, relationships or other parts of your life.”  It occurs when sexual activity goes from normal forms and levels to out of control.

If your partner cannot manage their sexual impulses, regularly incurs negative consequences as a result of their sexual behaviour, or tries to hide their sexual activity, they are displaying some signs of sex addiction.

Sex addiction is real, and it can be disruptive and destructive to the lives of sex addicts and those who surround them.  Like other forms of addiction, it often stems not from hypersexuality in and of itself but from other psychological issues like shame, low self-worth, intimacy problems, anxiety, depression, or a history of trauma or sexual abuse.  Those who have relationships with sex addicts — especially their partners often have no idea what is going on because sex addicts are practiced at compartmentalising this aspect of their lives and have entered into the relationship with their addiction kept secret.

If you are the partner of a sex addict, you may find it crazy-making to be constantly on the lookout for unfaithful behaviour, feel distrustful or feel the urge to retaliate.  On the other hand, you may feel guilty and pressured to accommodate the addict by trying to meet their sexual needs.

Because of the hidden and shameful nature of sex addiction, discovering a partner’s patterns of betrayals can be shocking and psychologically damaging. Partners of sex addicts often display classic symptoms of PTSD, especially around the time of discovery.  If your partner is a sex addict, it is important to seek out treatment both for him or her and for yourself.

Remember, there is hope!  Counselling can equip sex addicts and their partners with healthy coping strategies — read one partner’s treatment success story with her husband of six years.  Sex addiction is a deeply personal matter and the embarrassment surrounding it may be a barrier to seeking treatment.  It is important, however, for addicts to focus on the benefits of receiving counselling, realise they are not alone, and remember that client-therapist communication is entirely confidential (except in cases of abuse that mandate reporting).

Because of its sensitive nature it is important to seek out a therapy programme that is competent in the area of sex addiction.  The Cabin Sydney offers a comprehensive therapy programme for sex addiction. Our holistic approach strongly recommends treatment for spouses, which includes guidance through the addict’s ongoing recovery process. The addict’s initial phases of treatment include psychoeducation about their disease, breaking through denial and preparation of a “full, formal disclosure”; delivered to the addict’s partner in the presence of their respective therapists. The therapists then help the couple create a list of boundaries and expectations and provide guidance in implementing them through both individual and group counseling. If you are concerned about sex addiction in your household, contact an addiction specialist to find out how you can get help.

Love Me, for I Love Me Not: All About Love Addiction

Compulsive sexuality is a manifestation of the disease of addiction

Sex Addiction Proven to be Real