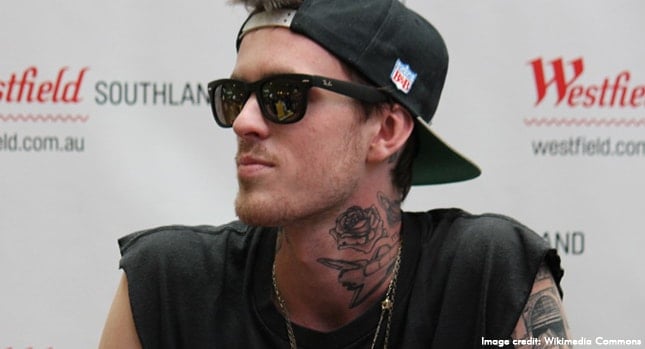 Melbourne rapper 360 has just released a new song chronicling his battles with codeine addiction.  “I’m Sorry” was released as a confessional on the rapper’s Facebook page with the description, “Exactly 1 year ago I was on tour, something happened and I had to cancel the rest of the tour. This is what happened…”  It contains starkly straightforward, personal lyrics relating his experiences in detail.

I should be dead / Maybe I’ve got nine lives / Seven left / Cos I’ve already died twice/ I’m about to get deep but I really hope you feel it though / See talking about it hurts, it’s when I was an addict but I was at my worst.

Gimme any drug, I was chewing em up / If I have nine lives then I’m using them up / No one knew my addiction it was stupid as f*** / Ninety pills daily of Nurofen Plus.

I know that’s extreme and I should be dead right / But I was so f***ed up my tolerance was that high.

That’s three packets in a day / I didn’t get high but I would have them anyway / Because if I didn’t take em then I’d be hitting withdrawals / And guess what? All of this was mid-tour.

Matthew James Colwell, better known by his stage name 360, was found unconscious and convulsing on the floor by his manager before a show at the Great Northern Hotel in Byron Bay in January 2015 after overdosing on 120 pills of over-the-counter codeine pain medication. 360’s career had been on the rise — he had won awards at the ARIA Awards, APRA Awards and Independent Music Awards and his sophomore album Falling and Flying and singles “Child” and “Boys Like You” had gone platinum.  He was touring in support of his 2014 album Utopia, massive quantities of codeine meds in his suitcase, when the episode resulted in the cancellation of the remainder of his tour, being put on suicide watch and checking into a drug treatment facility.  360 had built up a tolerance over years of addiction and had been taking around 90 pills of Nurofen Plus a day. Because it’s legal and easily obtained he was able to travel with large quantities of the drug, making it a convenient substitute for heroin. He had developed routines to spread his purchases out over many frequented pharmacies, sometimes visiting up to six pharmacies in one day.

“I think my biggest regret is I did not tell anyone.”

Though 360 has often accused by his listeners of being a sellout or a pop star, “I’m Sorry” seems to have struck a chord with many Australians who can identify with his pain. Codeine is often used privately and its addiction kept under wraps as its effects are not as obvious as other street drugs such as ice.  360’s honest and open lyrics about dealing with his addiction have encouraged many of his followers to come out of the shadows about theirs.  360 fan Tals Slawomirski says, “This brought me to tears. I know exactly what you have experienced and been through as I too used to take 95 nurofen + tabs each day. I will be 2 yrs clean at the start of June this year. Well done 360!” Another fan adds, “Toughest thing to do is talk about it. I really hope this reaches people out there and pushes them to speak up! If you save 1 life you have won but I think you will save much more!! Respect brother! Keep up the good work.” With over 8 million views in 10 days, it seems there’s no shortage of people who can relate to what 360 is going through.

“Smoking out, pouring up, keeping lean up in my cup”

Codeine’s presence in the hip hop world is certainly not a new one.  Promethazine-codeine cough syrup mixed with lemon-lime soda and candy — called lean, purple drank or sizzurp — has been popular in hip hop metropolises in the U.S. since the 80s.  Popularized by DJ Screw in the 90s, lean drinking has since become a pervasive culture in hip hop and has been referenced in countless songs, from Jay-Z’s “Big Pimpin’” to Three 6 Mafia’s “Sippin’ on Some Syrup.”  Its negative consequences are no secret either — Lil Wayne’s struggles with codeine addiction, including his hospitalization for seizures, are widely known and documented.  Habitual use of the concoction was responsible for the deaths of two of its most vocal proponents, DJ Screw and Pimp C.

Codeine is an opioid pain reliever derived from morphine and used to reduce low to moderate pain.  Over-the-counter drugs such as Nurofen Plus are half codeine and half ibuprofen.  While the codeine is what makes them addictive, the ibuprofen is actually even more dangerous.  Taking large amounts of ibuprofen over long periods of time results in serious health issues like liver problems, bleeding gastric ulcers, even massive hemorrhaging and kidney failure.  Pharmaceutical drug abuse in Australia has risen to dangerous levels over recent years.  The number of codeine-related deaths doubled between 2000 and 2009, with most of the deaths being attributed to multiple drug toxicity.  Australia is one of the few developed countries that still allows codeine-based products to be sold without a prescription, giving Australians easier access and facilitating the development of addiction.  Unlike with over-the-counter cold and flu medication which can contain pseudoephedrine, used to make methamphetamine and ecstasy, there is no central database of people who have bought over-the-counter painkillers.  360’s public discussion of the topic is prompting calls for stricter regulation.  The Pharmacy Guild of Australia advocates for requiring names and addresses to be registered for those who purchase the drug.  A report by the Therapeutic Goods Administration last year recommends all codeine products be scheduled as prescription drugs.  The TGA says it will make a final decision on the matter in mid-2016.  Pharmaceutical addiction in Australia has become an epidemic, widespread and understated.

360 has now been sober for one year.  He’s grateful to be alive and is focusing on healthier habits like exercise and writing music.  He admits the glamorization of codeine in the hip hop scene was a big contributor to his previous lifestyle and has left behind his friends who were a negative influence and pressured him to party when he was trying to quit.  It’s a challenge, but he was able to get his life back on track with the help and support of a drug treatment programme.  Quitting addictive substances like opiates is difficult to do on your own — if you are worried that you or a loved one has developed an addiction to pharmaceutical drugs, you should get in touch with a professional right away.  The Cabin Sydney offers an effective treatment method based around the Recovery Zones model, which has a high success rate and a completion rate of 96%.  We offer a thorough assessment for any individual who is possibly in need of addiction treatment.  Contact The Cabin Sydney today to learn more.

Why do Ice Addicts in Sydney Display such Violent Behaviour?